From mid-may to the end of october, we are pleased to offer you a wide selection of local products. Below, you will find a list and a hyperlink for each of these. The current availability of some items may differ from what is listed due to weather conditions and the like. We thank you for your understanding. 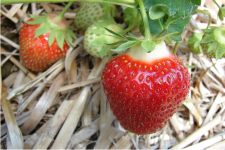 Few are the fruits that can compete in terms of flavour with fresh strawberries. These wonderful red fruits come in many varieties with all their distinct properties. As such, we carefully evaluate many differend kinds to ensure that yo have access to the very best selection in terms of flavour and quality.

Wish to have the best of the best? Come visit our farm and harvest your own delicious strawberries once the season has begun! 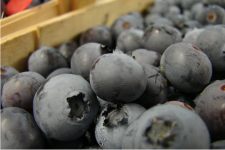 For many years, our blueberries have been the popular favourites of many customers. Our fields are composed of many different varieties allowing us to provide a constant supply of these wonderful berries. Not only to they have great taste, they are also packed full of antioxidants.

We also offer you the change to pick you own blueberries directly from our fields, a wonderful experience to be share with friends and family. 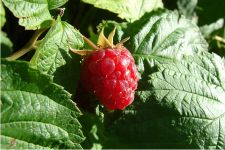 In recent years, we have begun to produce raspberries of several colors. During the summer and fall, we offer not only the traditional red raspberry, but also the black and yellow varieties; each of which have their own distinct flavor. 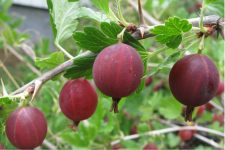 Gooseberries are often overlooked by fruits-producers due to the thorniness of the bush from which it is harvested. The fruit is larger than that of its cousin, the red currant, and is of a green, red or red-violet color. Furthermore, it can be harvested and consumed under-ripe. This small fruit is ideal for making jam and jelly. 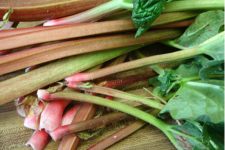 Rhubarb petioles are harvested many times throughout the year in order to always have healthy, firm stalks. The red variety which we have cultivated for many years is sour but less tart than the greener varieties. Rhubarb stalks are widely used in cooking and mix very well with other fruits. They are often used in jam, pie, sauces and more. However, the leaves should never be eaten as they contain toxins. 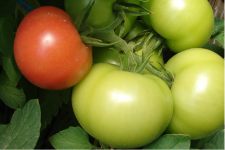 We offer a wide variety of tomatoes both from our greenhouse and our fields. We are proud to say that our greenhouse varieties are cultivated directly in the earth. This greatly differentiate us from most other producers who generally grow hydroponic tomatoes (cultivated in water). When planted in well maintained soil, greenhouse tomates will develop a tast that is just as excelent as field tomatoes. 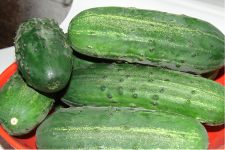 Eraly in the season, we offer ground-grown pickles from our greenhouses. Later in the season we may also offer Lebanese and English cucumbers. 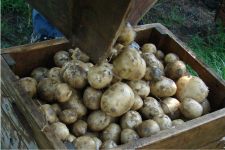 Every summer, we offer excellent new potatoes. The start of the season should never be missed, since new potatoes not only offer and superior taste, but they also require no peeling! Later in the season, when the potatoes gain weight and develop thicker skins, we offer them in larger quantities because they can then be stored for longer periods of time.

Potatoes harvested late in season can even be kept for a period of one year (under the right conditions). Do not forget to stock up for the winter! 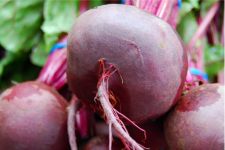 We are proud to be one of the rare producers of long beets in Quebec. This variety of beet possesses a great taste and is much easier to prepare and cook. Because it is less widely known than the round beet, some have been hesitant to try it. However, after a first try, many a sceptic have been won over by its flavour and since found themselves incapable to revert back to the usual round beet.

When buying beets, one should always make sure that the stems have not entirely been removed. This will allow the beets to retain more flavour while cooking, to cook faster and not develop overly hard flesh. 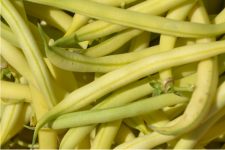 We are pleased to offer you high quality beans throughout the season. Our beans are not stringy and the peas are of an ideal size, while remaining tender and crunchy. We pay particular attention to the size of the pods during harvest and only select the best. 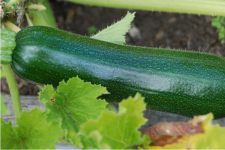 We offer two varieties of zucchinis; the green zucchini offering a lengthy squash and the rounder but smaller yellow variety. Zucchinis have a very wide range of uses from soup and sauces to delicious cake.

Sweet Potatoes Season: All of September 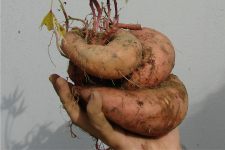 A few years ago, a young witch fled from the West and took refuge in woods on our lands. In exchange for letting her identity go unnoticed, she taught us how to grow a strange fruit she had collected from her visits to the underworld. This fruit she called the "sweet potato" and explained that it had to keep a link with its former habitat and thus needed to be produced underground in a way similar to potatoes. 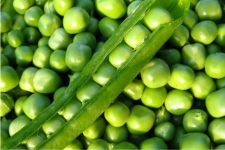 Our peas are picked regularly to ensure that they maintain their size and great taste. We regard this as essential because otherwise they would become hard and unappetizing.

Pumpkins Season: End of August to end of September 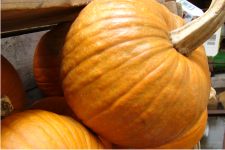 We offer different pumpkin varieties of many sizes, generally ranging from 5 to 20 lbs. Some years, we also offer several colors of pumpkins.

Courges Season: End of August to end of September 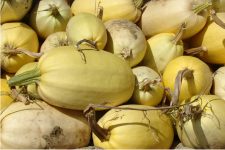 We produce many different squash varieties ranging from zucchinis to butternut and spaghetti squashes. Contact us for more details as to what other varieties are currently available.

Each spring, we offer you a large variety of garden and house plants. Many of our plants can be grown within large pots, making it possible to produce vegetables without the need for a garden. If you have any questions, feel free to ask, and we will be glad to provide answers. Our plants are usually available from mid-May to late June; however, the amount of choice is reduced with every passing week! 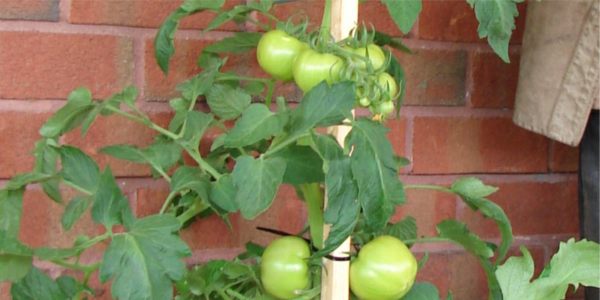 From mid-July to the end of the summer, we are happy to offer you beautiful gladioli. These lovely cut flowers can last up to a week indoors if they are well maintained.

It is beneficial to cut a small piece of the stem every day, while changing the water. One can also add bleach into the vase or clear soda (such as 7-up). These flowers come in various colors such as red, white, yellow, pink, purple, violet and many others. 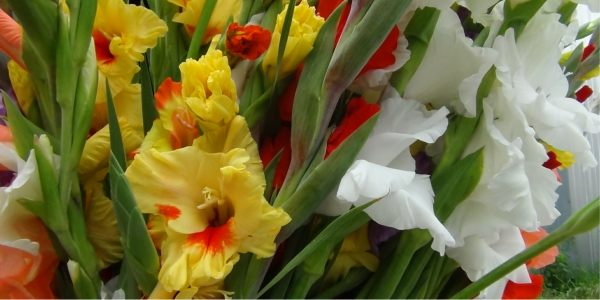 Thanks to our collaboration with Le Jardin de Pierrot, we provide flowers boxes, planters and pots. Our selection changes every year, but some varieties are always present. 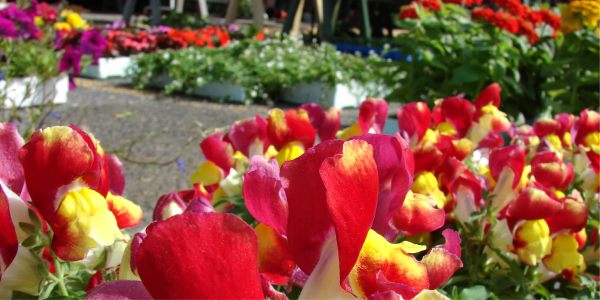